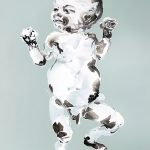 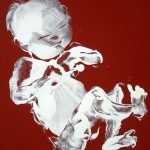 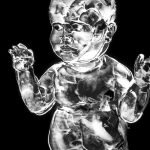 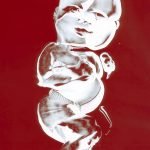 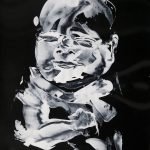 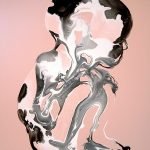 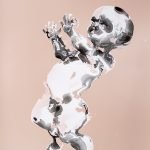 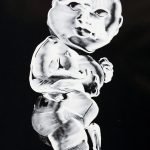 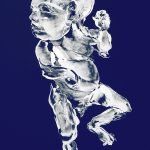 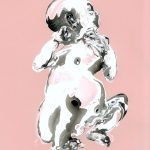 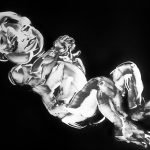 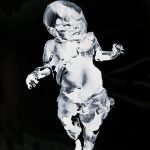 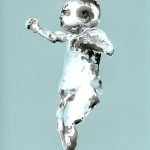 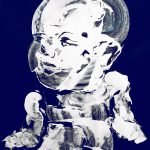 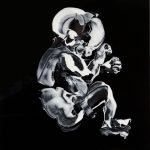 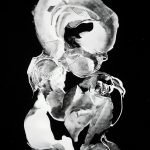 «…his «Puer» paintings (1996-2004) are an intriguing body of work. They are cleverly expressionistic painterly works. Mr. Aguilar has a subtle knowledge of materials, as his use of colored laminated paper suggests. The grayish acrylic paint seems to float on it, giving the figure of the frail in fact a certain ironic transcendence. At the same time, the infant is a down-to-earth symbol, as its mutant look suggest. The face is sometimes that of a knowing adult, the body is always morbidly vulnerable – a heap of shredded gestures, as it were – suggesting that the figure is a memento mori. It is certainly not Keith Haring’s «radiant child»…»            Donald Kuspit, 2004 – art critic

I worked on this series of paintings for years, and my work on it was inspired on and dedicated to the image of the child. I have always seemed to explore art by means of elaborating series of works, and following a constant work-direction concept over a period of time.

I am interested in working with the image of the infant for various reasons and understand that it is one of the most powerful and influential icons in our Western Society. Myth, Religion and Art have been containers for the image of the child; now it is advertising that takes their place and moralizes our consciousness. That takes us to Psychology and its longtime investment in exploring child behavior and development. I reflect upon this work inspired with Depth Psychology’s explorations on the Child image in connection to its archetypal dimension and significance. Mostly to C.G. Jung’s discovery about archetypes – to the Child-Puer image: its attitude is full of futurity, inspirational power, fragility, ambiguous sexuality, mythological god-like powers, wounded condition; and above all its ancient and ongoing relation with an old important mythological question called Need (the goddess Ananke).